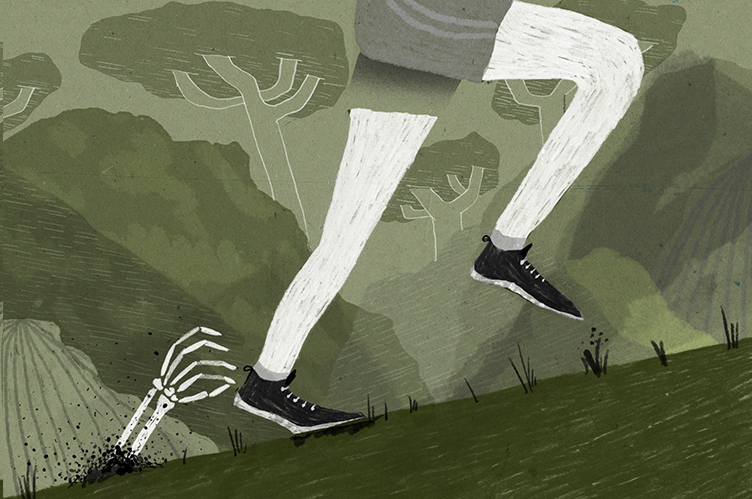 When depression hit, Zoe Margolis felt suicidal. Pills and therapy did nothing to help, but then she got out her old trainers and began to jog

t the start of this year, I was in the depths of the worst depression I have ever experienced. My public face was a mask of success, confidence and happiness, but, privately, I was defeated.

The long-term relationship that I had hoped would last the rest of my life and lead to children had ended, painfully. Work was at a standstill and I was broke. I felt overweight and unhappy with my tired, sluggish body, and was unable to concentrate on anything apart from my persistent grief and self-loathing.

I am a writer who has always written openly about my thoughts and feelings, so my inability to do so didn’t seem like writer’s block – my entire existence felt worthless.

I thought about suicide

Every waking moment was filled with crushing anxiety and heavy sadness. I couldn’t sleep, and all I seemed to be capable of achieving each day was crying, mourning lost opportunities both personal and professional. After months of a broken heart, I felt I had used up all my “listening ear” favours with friends, and that my permanently low mood made me unattractive company. I longed for quiet, for my brain to shut up. I was isolated, overwhelmed and suffocated by my depression. I considered suicide and began to self-harm. I found that external pain temporarily numbed my internal pain. I knew I was at my lowest ebb.

I’m not sure exactly how I moved on from that. Doctors, pills and therapy had done nothing to remove the darkness that hung over me like a rain cloud. Medical professionals had suggested that I try exercise, but their advice had fallen on deaf ears. When you lack the energy even to get out of bed in the morning, the last thing you need to hear is that you should pull yourself together and go to the gym.

But something in me, of my own accord, began to shift. It was subtle and quiet, but present: it was a vague desire to move – to put one foot in front of the other and go forwards. To get out of bed, out of the home I had shared with my former fiance, and leave the bad stuff behind me.

Walking in the local forest park

I began walking in a local nature reserve. I would walk until the panic lessened and, instead of hearing my own whiny voice in my head, I became aware of the birdsong around me. This escapism became a daily focal point and soon my walks got faster and longer. After a few weeks, walking wasn’t fast enough to keep up the momentum of movement required to quieten my mind: it made more sense to run.
Years ago, I had taken up running to recuperate from a back injury. I had enjoyed it, but my trainers had been gathering dust in my cupboard for some while. When I decided to pick them up again, it felt quite daunting, but the challenge of putting my shoes back on and getting out there seemed easier than facing my depression; running was an appealing distraction.

So that was how I found myself, on a freezing cold February morning this year, running in my local park. It was dark, miserable and pouring with rain. As I jogged, years of stiffness and pain in my muscles, I kept thinking: “Zoe, if you can do this, if you can make it through how grim and horrible it feels right now, you can make it through anything.” Six months later, and I know it to be true: I have not just made it through, I have survived.

Every step I have taken in the past few months has been a step away from pain, a step closer to feeling better. When I run, I know that at some point endorphins kick in, positive brain chemistry happens, and I feel brilliant.

There is science behind that, obviously, but to me it is a simple equation that needs little explanation: I feel crap, so I run, and afterwards, sometimes for days, my depression lifts. It is not a magical cure, and I’m sure it doesn’t work for everyone, but it keeps a lid on it for me. I never expected running to lessen my depression and am surprised, daily, that it does. For me, it is truly a lifesaver.

Running is a lifesaver

Alongside running, I have also become keen on living and eating more healthily. Using MyFitnessPal and Runkeeper apps and wearing a Fitbit has helped me to shift my focus to leading a more active life. As a result, I feel fitter than I have for years and I am almost 13kg (2st) lighter, which makes exercising easier.

I adore how my body has changed, becoming firmer and more powerful. When I look in the mirror now, instead of hating my reflection, I see strength, determination and beautiful muscles. I like who I am and, every time I run, I like myself even more. I am impressed by my body’s new abilities and, when I improve my speed or distance, or just have a good run when I am hungover or lacking sleep, I feel as if I have won a prize. The reward, however, is not a medal, but the achievement of being alive – and thriving.